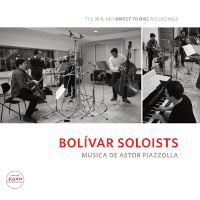 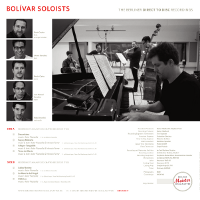 »I met the five members of the Bolivar Soloists during a recording session with Rolando Villazon and was immediately thrilled by their passion, joy in music-making, musicality, virtuosity and temperament. Everything just gushed out of them in profusion. I asked them if they would like to make a direct-to-disc recording with me, well, actually I had to first explain to them what was meant by the term. They had no idea what it was – and how should they? After all, these days all recordings are made using the most advanced technology available. We, on the other hand, would have a completely analogue recording and reproducing chain, but that was not the crucial factor. I explained to them that they would not only have to play a complete work but a whole LP side in a single take, and that not even one note could be corrected later; the recording sessions would be far more intensive, and their pulse rate would rocket during the recording. Furthermore, they would have quite a different feeling when listening to the recording on LP rather than CD, and the musicians and recording team would need to work together very closely. Ultimately, a direct-to-disc recording would definitely sound quite different to a CD production.

The Bolivar Soloists accepted the offer and it was immediately clear to them that for such a unique project they would record works by their revered Astor Piazzolla.

Time passed, but at last we arrived at a date for the recording of seven tangos. The whole process of making a direct-to-disc recording is completely different from a usual recording. During our four days together the first day was given over completely to rehearsing, without a single microphone in the recording studio. The reason is simple: the musicians simply cannot depend on the technical refinement and possibilities of modern sound manipulation. No overdubbing or editing is possible. What one played was exactly what would be heard later – nothing more and nothing less. There were no compromises – preparation is everything.

On day three we concerned ourselves with the sound check. The positioning of the musicians, the microphones to be used and their positioning, the level ratio, the echoes, everything was checked and re-checked again and again (we used an analogue tape recorder for this) and then optimized, because of course the same thing was applicable to both the recording team and the musicians: once the recording has taken place, nothing can be done to alter the sound.

On the evening of the third day we all felt confident enough to be able to make the real recording the next day. We even ventured to make a further experiment in that we invited friends and colleagues to attend the recording session. On 17th January 2012 our direct-to-disc recording finally took place. The musicians stood in a circle, surrounded by a small audience. The timing of the beginning of the actual recording had to be discussed briefly because the musicians can only begin with the recording when the lead-in groove of the lacquer disc has been cut. And then we were off; there was no second chance.

The Bolivar Soloists played like the devil (or like angels, depending on how you look at it). We cut five lacquers in all, the A side three times, and the B side twice. In between the recordings we took a short break during which intensive discussions took place. After the last take (in this case the equivalent of cutting an LP side) the tension subsided, and we all hugged one another. Juan Manuel, the violinist, even asserted that he had never played so well in all his life. What a statement! And what better reason could one have for using this particular recording technique.

Now all we had to do was write the numbers of the recordings on the lacquer discs and cross our fingers that nothing disastrous would happen to them during transport or at the pressing plant. You see, during the pressing procedure of a direct-to-disc recording the adage still holds good: a re-do or undo is just not on.« 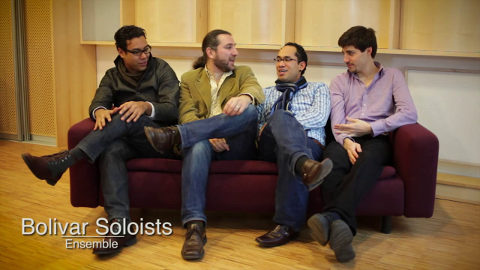