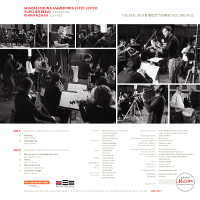 The Orient, with its unsettled history and culture, has never ceased to fascinate generations of people. Memories real or imaginary become intermingled; tales from A Thousand and One Nights become mixed up with reality.

This cultural flair is at the heart of the LP Orient and Occident, which the Mendelssohn Chamber Orchestra, Leipzig and soloist Kinan Azmeh have recorded using the direct-to-disc method. The resulting magical atmosphere will most certainly captivate all those who listen to it. Each of the chosen works offers a unique contrast to the others.

Compositions by Jean-Baptiste Lully or Ludwig van Beethoven, who represent the spirit of their time and wrote 'oriental' works with European understanding, are contrasted with those of the Syrian clarinettist Kinan Azmeh, who – thanks to his origin – possesses a quite natural and original view of the fascinating Arabic culture. A truly sensual recording!

And highly original too, for this direct-to-disc recording is available exclusively on the pressed LPs, limited copies (as it were) of the original recording on the lacquer disc, comparable to a copy of an etching.