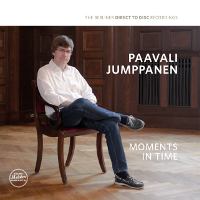 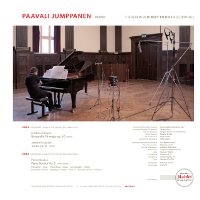 I wanted to play works from three different eras for my second D2D recording, the first having focused in the "golden era" of vinyl recording. The media is perfect for capturing the acuteness of live performance, which is perhaps the most important aspect shared by the works by Boulez, Chopin, and my compatriot Kuusisto. The works themselves are very independent from one another.

The three compositions on the record represent important columns of my repertoire. No pianist can go around Chopin (and only a few would even wish to do so). Jaakko Kuusisto is one of the many composers of my own generation whose works I have premiered. As a performer I feel a responsibility to help the creation of new music, and that responsibility is a constant source of inspiration.

Having recorded the Boulez Sonatas digitally a decade ago, it was fantastic to revisit the Third Sonata at this moment. For one, I have had the opportunity to live with the work on stage all this time and, also, 2015 marks the 90th birthday of the composer. My wish has been to bring a renewed sense of "now" to the work known for being complicated to build into a performance.

The selection of works on the record challenges our views on what is modern. The three composers' styles can easily be described as original, but the question of their outlook on musical progress is more ambiguous. Boulez is of course a passionate spokesman of music as a progressive, but the stance of both Chopin and Kuusisto can only be guessed. However, listening to the three different compositions, progress as a concept quickly becomes irrelevant. The three compositions are all driven by sounding ideas that in the end capture moments in time. This idea gave the recording its title.